I attended a Hands-On Horse Care™ workshop to enhance my knowledge of using flower essences with horses. The horse I spent the most time with at this workshop was a 27 year-old Thoroughbred named Dancer. 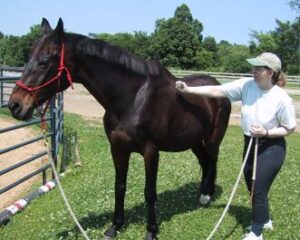 Dancer was originally a racehorse. He went on to a riding stable, and then became a Dressage horse until his current owner; Marcia adopted him at the age of 17. Marcia noticed as time went on, that Dancer had some deeply rooted emotional issues. She trained and showed him in Dressage for three years before she switched to the Parelli Natural Horsemanship method. Marcia believed this method helped bring Dancer back to a healthier emotional state. He was trained by this method until he was 25 years old. By utilizing this method, most of Dancer’s emotional issues began to clear up.

The Root of the Problem

Marcia reported that Dancer suffered from a fear of whips. When he became stressed, he’d try to run. Dancer responded with “speed”. “When in doubt, run as fast as you can.” He used to “project outward” when he felt anxious. He was not able to focus within. Marcia said he would “literally shoot out of his body”.

Marcia decided to retire Dancer when he was 25 years old, because he was diagnosed with chronic arthritis of the hock. She noted that in April 2000, Dancer lost a lot of weight. She discovered he had two infected teeth. Marcia witnessed Dancer’s health slowly failing. In the Fall of 2000, his coat became dull and coarse. Marcia gave him ground flaxseed and corn oil, but neither supplement helped.

In February 2001, Dancer colicked. Marcia’s veterinarian tended to his condition, and a few weeks later, he colicked again. Marcia said she was able to get Dancer through this second episode by using acupressure. The holistic veterinarian that cares for Dancer believed his life force was depleted. She recommended acupressure be done on Dancer at least once a week. He was then put on a thyroid supplement and a medication for Cushing’s disease, though Marcia learned shortly after, that Dancer did not have this disease and the medication was stopped.

Marcia evaluated Dancer’s nutritional history and made some changes. At the time this article was written, his diet consisted of hay and senior pellet feed. He was receiving various supplements, along with flower essences that were selected during the Hands-On Horse Care TM workshop: Wild Oat, Wild Rose, Oak and Clematis.

I felt privileged to be working with such a fine horse as Dancer. I was impressed with his serene nature, and willingness to receive the flower essences. At the workshop, I asked Marcia what her goals were for Dancer. What did she hope the flower essences would do for him? Marcia replied, “I want to help him to develop an interest in life again”. Dancer appeared to have a lack of interest in his surroundings. He was living more outside of himself. Marcia believed there was a part of him slipping away. She also stated, “I want to bring light back into his eyes and improve his comfort mentally and physically”.

The first day of the workshop, we administered Oak to assist with rebuilding Dancer’s inner strength. This was administered by first misting Dancer’s entire body, and then massaging the essences into his gums.

Immediately after receiving the Oak, he drank an entire bucket of water.

We then misted him with Wild Oat, massaged this into his gums and waited about five minutes prior to misting him with Wild Rose. After he received these two essences, there was a noticeable change in his demeanor. He became more responsive and accepting of the flower essence application.

We chose the Wild Oat because Dancer had a lack of energy. The Wild Rose was intended to help him find joy in living again. With both of these flower essences, Dancer voluntarily sniffed our hands and allowed his gums to be massaged for a longer period of time. (In the photo above, Marcia is misting Dancer with flower essences.)

How We Administered the Flower Essences to Dancer

The approach we took in administering flower essences to Dancer was as follows: 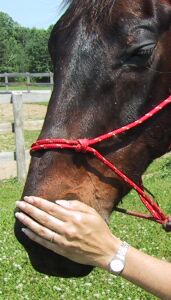 1) We first showed the bottle of flower essences to Dancer and allowed him to investigate it.

3) With the essences still on our hands, we rubbed the remaining liquid on Dancer’s head and over his brow chakra. (The brow chakra is located between the eyes.)

4) When we misted his entire body, we’d mist the air around Dancer, and away from him so the mist wouldn’t spook him.

5) A gentle mist would be sprayed over Dancer’s body. The misting would be done for about 5-10 minutes. We’d allow that essence to absorb into the energy field, and then mist our hands, and gently massage the flower essences into his gums. (Kathy is massaging Dancer’s gums with flower essences in the photo to the right. In the photo below, Dancer is licking flower essences from Kathy’s hand.)

Dancer’s Response to the Flower Essences 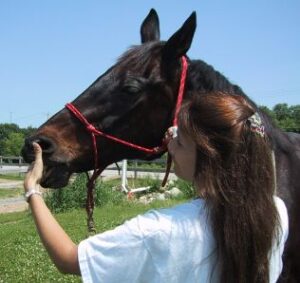 I was amazed at the difference in Dancer’s coat between the first and second day of the workshop. By Day 2, his coat was shinier. It actually appeared to have a beautiful purple- velvet glow to it. I discussed this with Marcia, and we mutually agreed to continue using the Oak, Wild Oat and Wild Rose flower essences.

The flower essences had a profound effect on Dancer during that weekend. We were able to visually see Dancer respond to each of the flower essences. The flower essences that appeared to have the most impact were noticeable by the response Dancer had. After receiving the essences, by the misting method; having him smell our hands or lick the essences off of our hands; and by massaging the essences into his gums, Dancer exhibited a “lick and chew” behavior, he then lowered his head and yawned. Often times we’d see the jugular vein pulsate. 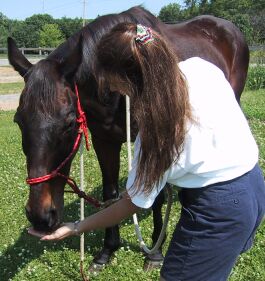 We noticed all the other horses at the workshop were showing similar outward signs of the positive effects flower essences were having on them, too. They were very accepting of the essences, and it appeared that the essences chosen for each horse had a positive effect on the emotional state of that horse. I saw the behavioral changes in Dancer within the first hour of working with him. By the end of the 3-day workshop, Dancer appeared to be more alert, and responsive to the activities going on around him. In the number of years that I’ve been working with canines and flower essences, I’ve never seen such a quick response to the energetic patterns of the essences as I witnessed with Dancer.

After the workshop, Marcia wanted to continue utilizing flower essences to help enhance Dancer’s emotional well being. She continued to give him Wild Oat, Wild Rose, Oak and Clematis (for focus). Marcia had the essences applied to his food three times daily and also added the flower essences to his water. She’d add six full dropper squirts in his water bucket daily. Several times per week, Marcia mists him with this blend and also massages his gums with the flower essences. Marcia no longer rides Dancer, but if she were to work him again using a whip, I would recommend adding Mimulus to his current blend, because of Dancer’s fear of whips.

I visited Marcia and Dancer a few weeks after the workshop, and Dancer looked wonderful! His coat was much shinier, and his overall demeanor had changed. Marcia said, “The flame of life is back! Dancer is showing interest in his surroundings again.”

Marcia admits the flower essences have truly made a difference in Dancer’s life, and her’s too because she is getting her friend back, mind, body and soul.

An Interview with Ruth Spencer: A Gifted Woman Who Can “Read” Animals

Getting a Dog – Part One

Getting a Dog – Part Two

Good Breeding Practices: A View From One German shepherd Breeder

Help! The Sky is Falling!

Keeping Your Pet Out of Harm’s Way

The Academy of Veterinary Homeopathy 2006 Conference

Whelping and Weaning: New Thoughts on an Ancient Process​

Why Does Healing Touch Work?